The more parents of young children access childcare, the greater are the economic and financial benefits to women and to the economy as a whole. There is a huge volume of academic and other research from around the world that shows this to be the case. Affordable and accessible childcare also has a strong and significant positive long term impact on the economy in terms of higher workforce participation and stronger productivity.

In addition to the benefits to parents and women in particular, a well-structured childcare system is an economic reform that boosts productivity and is not a social welfare issue.

One reason for the gender superannuation gap in particular, but also for the pay gap, is the amount of time women spend out of paid employment relative to men to undertake unpaid care of their children. When women are not earning a wage, there are no contributions to their superannuation savings.

It is a similar issue with women working fewer hours and therefore having a lower total pay when they return to work after having children. Fewer hours of paid work often in lower income occupations, means lower superannuation contributions and subsequently balances.

Studies from the OECD show that across a range of diverse countries, childcare costs impact the ability of women to engage in paid employment.

There is a strong and unambiguous correlation between the level of out of pocket childcare expenses and female employment rates (see chart below). In broad terms, in those countries where more than 50 per cent of 0 to 3 year olds are in early education and childcare, the employment rate for women with children 0 to 3 years olds is around 70 per cent.

In countries with less than 20 per cent of 0 to 3 year olds in early education and care, fewer than 20 to 25 per cent of women with children in this age cohort are employed. 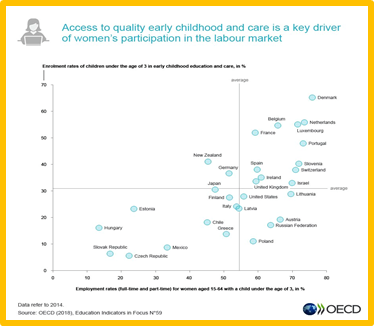 It is worth noting when judging the cost-benefit of government financial assistance for childcare and early learning, there are benefits to the children in the form of educational attainment and socialising with other children, both of which can improve their life skills.

Other studies show that these broad positive trends in terms of workforce participation for women are also evident for parents of children over 3 years old through to primary school age.

In addition to affordability of childcare, accessibility to childcare centres is a key aspect of further childcare reforms. This is across all geographic locations but is especially the case in regional and rural areas.

During the series of roundtable discussions conducted by eS4W since 2018, many participants noted that the geographic spread of childcare centres can be a further constraint for parents accessing childcare.

There were numerous examples where the nearest childcare facility was approximately a 30 minute round trip drive from their home and workplace for both the drop off and pick up. This imposed a significant time and expense cost in accessing childcare.

This means that an important facet of the policy strategy to improve and enhance the childcare system should include having an appropriate number of centres across diverse geographic locations including in regional areas and the cities.

eS4W agrees with the analysis that the provision of affordable and accessible childcare will be expensive for government budgets. eS4W also fully endorses the research that shows the benefits to the economy from the reforms are substantially greater than these costs, especially in enhancing the economic and financial security of Australian women whilst benefiting children with a safe and early education  and developmental environment.

While the cost of government subsidised childcare is expensive, the cost of not providing it to the economic security of women and longer term economic growth in Australia is far greater.