The date marks the additional time from the end of the previous financial year that women must work to earn the same as men had to work.

What is gender equality?

Gender equality is not only a fundamental human right, but a necessary foundation for a peaceful, prosperous and sustainable world.

Workplace gender equality is achieved when people are able to access and enjoy the same rewards, resources and opportunities regardless of gender.

What is the gender pay gap?

There are different types of GPGs:

is the difference between women’s and men’s average weekly full-time base salary earnings, expressed as a percentage of men’s earnings. It is a measure of women’s overall position in the paid workforce and does not compare like roles.

The GPG cannot be fully explained by a set of measurable variables, but according to WGEA, 2017 these factors influence it:

Discrimination and bias in hiring and pay decisions;

Lack of workplace flexibility to accommodate caring and other responsibilities, especially in senior roles;

Women’s greater time out of the workforce impacting career progression and opportunities.

What is equal pay for work of equal value?

There is a difference between equal pay for equal work and equal pay for work of equal value. Equal pay compares the pay of incumbents in the same or very similar jobs. Pay equity compares the value and pay of different jobs, such as nurse and electrician. Either men or women can complain that their work is undervalued.

What can be done to narrow the gender pay gap?

SDG 8 – Target 8.5: By 2030, achieve full and productive employment and decent work for all women and men, including for young people and persons with disabilities, and equal pay for work of equal value.( https://unstats.un.org/sdgs/metadata )

There were four dramatic policy changes in the 60’s, 70’s and 80’s that started the first narrowing of the GPG: 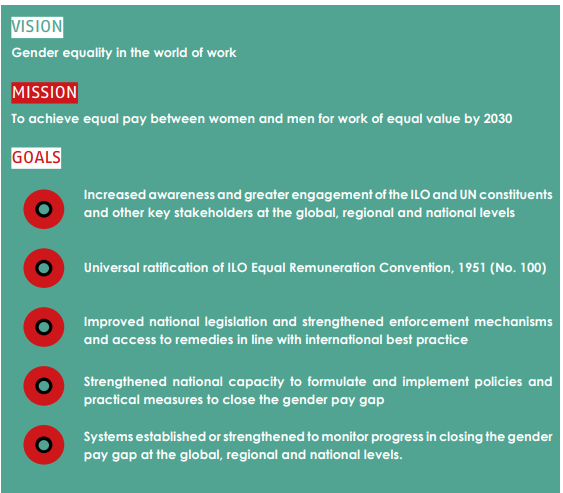 For the Australian Government and employers to support the UN Women & International Labour Organisation initiative.