So what are these non-traditional occupations and industries and why should young women consider working in them? 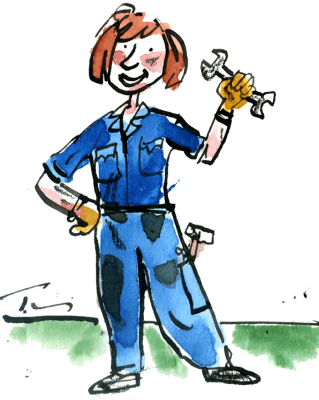 They include the construction, mining, and utilities industries (electricians, plumbers, etc.), where women account for around 12 per cent, 15 per cent, and 23 per cent of employees respectively.

These industries and occupations are usually higher paid, and if you are going to work, then pay and conditions need to be considered along with job satisfaction.

You can compare minimum starting rates of pay in a variety of industries.

And a bit more detail

‘Gender segregation’ of jobs and industries reflects an out-dated notion of women’s primary role to take responsibility for the caring work of family, usually accompanied by what is often considered to be a less important involvement in paid work.

In contrast, men’s primary responsibility, is considered by many to be supporting the family through paid work, having only residual involvement in caring work.

Furthermore, women usually work before, after and during their child rearing years.  Many women are the primary income earners in their households and it is important that they are able to build financial security for themselves and any dependants they may have.’

So, get a job that pays well and allows the flexibility to work around your care responsibilities. That will lead to your long term economic wellbeing.

A key recommendation from an analysis of graduates starting salaries is that women students be given more information about career choices, and encouraged to consider training for traditionally male occupations.

The analysis suggests that the overall wage gap favouring male graduates can be partly attributed to an over-representation of men in fields of education that typically attract higher starting salaries, such as Engineering.

Likewise, women are over-represented relative to men when it came to Humanities, which is ranked at the lower end of the salary distribution.

Want to be a role model?

You could have a considerable impact on the future choice of career of younger people.

Be a role model »

eS4W has produced additional resource material that will provide information about non-traditional occupations to the young women at your school.